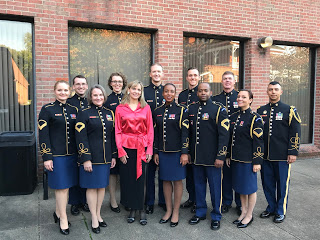 I had the distinct honor and pleasure of spending a week this month with some of the finest musicians and classiest people I have ever met–the distinguished members of the U.S. Army Voices. This ensemble is a highly select vocal ensemble within the elite Army Band known as Pershing’s Own. They are the bearers of the singing burden for official government ceremonies in Washington, D.C. including appearances at the Pentagon, White House, Capitol Building, monuments, and Arlington National Cemetery. They also get flown to many different places to sing the national anthem (like the Super Bowl and professional ball games) as well as on international performance tours. The auditions to become accepted into this amazing group are rigorous and competitive, yielding a crop of professional voices that can and do sing everything extraordinarily well. The impressive multitude of styles these individuals sing (not just well, but at amazingly professional levels) includes classical music, symphonic concert solos, musical theatre, jazz, rock, and endless renditions of every American patriotic standard known. My appreciation and respect for these heroes know no bounds.

During my workshop, we dove into working on vocal jazz repertoire, from solo pieces with a jazz piano accompaniment to 8-part ensemble arrangements replete with scat choruses and harmonic splits formidable enough to make professional jazz vocalists shy away from attempts at public performance. Not these brave men and women! Although only a few of them had any real jazz experience, they all (yes, ALL!) willingly laid down their inhibitions and embraced my workshop in improvisation and Dalcroze Eurythmics (the expression of music through kinesthetic movement) and enjoyed learning together. They supportively offered feedback to one another about improvements made during the course of our work (accepting criticism from other professionals is not known to be the pro singer’s strong suit…) Kudos to these humble, excellent performers for being willing to learn from and with one another! Not only did they make amazing progress during the course of our three hour workshop, but they also carried that new-found expertise into our performance the next day (click for video). I couldn’t have been prouder of them all!

During the week it was brought to my attention by an Army singer being honored at the time of his retirement that many international diplomats have commented to him over the years about the extremely valuable work the Army Bands and Army Choruses (and all the musicians in our American armed forces) do. When, for instance, foreign diplomats meet with our government representatives and the meetings do not go well, sometimes the last impression is made by these national musicians who paint a better picture of America–singing and playing songs from the native lands of those diplomats… the song in French, Japanese, German or Korean, may do a whole lot more to smooth America’s relations with those countries’ leaders than our government leaders and representatives often do. Our Army musicians are national heroes–they keep the peace, put a professional, respectful and patriotic face upon everything they do, and are so often the most successful representatives of our country (and of our citizens’ good will) than anyone else in the negotiating process. This reality should be reported in the news, for our future is much brighter in this day and age knowing that our Army, Navy, Air Force and Marine musicians are working around the clock to help our relations with every country in the world. For this we all ought to be tremendously grateful. They are heroes deserving of our praise, support, attention (they are so musically gifted, I wish everyone in the world could hear them perform!) and most of all, our loyalty. They provide necessary relief, honor and support for our soldiers serving on the front lines all over the world, and they themselves have made sacrifices that will never come to light. They have done it willingly because they love our country. Long live the U.S. Army Bands!

I would suggest to every outstanding young vocalist or instrumentalist right out of college, looking for a full-time singing or playing job, to pause long enough to take a good look at the opportunity that a career in the U.S. Army Band would offer. Folks, this organization is definitely worth considering in a world where recorded music is worth just about nothing anymore (because the internet has rendered it free for the stealing), and everyone knows that to perform music for a living means that you need to have another job to pay the bills. Not so for the U.S. Army Voices and Army Band personnel… their full-time salaries, benefits and retirement packages are quite attractive considering the slim pickins’ of alternatives for new music grads. If you’re interested in learning more, I have some friends I can put you in touch with! 😉 Long live the U.S. Army Band and the U.S. Army Voices, and thank you for all your immeasurably valuable service!