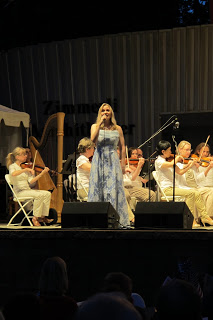 One of the challenges of any performing artist’s career is the high level of preparation that is demanded for consistently great performances. If an individual routinely has a month or more between concerts, preparation for the next concert may be garnered rather comfortably, but the more an artist performs, the less that type of luxury becomes likely. I consider myself fortunate to have quite a number of highly variable performances on the near horizon, but that, of course requires the discipline to prepare for more than one (or two or sometimes three) concerts at a given time. I believe in taking life one day at a time, so my NEXT performance is always the most important, but if the next one after that is only four days further out, it would obviously be rather unwise of me to ignore that show until the first show has come and gone! How then does one budget time to create the necessary preparation for every performance? Part of the answer lies in knowing thyself. I know that for me to perform a piano/vocal concert (which happens more often than not nowadays) requires both piano and vocal practice (not to mention songlist preparation, consideration of flow, keys, audience and other ponderances) so if the voice feels particularly tired on a given day, piano practice can get greater attention. Also, for a singer, memorization is an ongoing necessity. For instance, I have a performance approaching with the Williamsburg Symphonia, for which I must learn a new song. This is best done without necessarily taxing the voice by singing, and since “practice” can take many forms, it follows that when the voice needs rest, it is a perfect time to sit down with a pen and paper and write out new song lyrics until the ideas flow in the mind without hesitation. This saves vocal energy which can be put to better use when one is rested by singing songs that the body already knows well, focusing attention on expression, nuance and tonal beauty. It also puts practice time to good use when the voice does not feel like singing.

Another crucial aspect of preparation is knowing when to schedule performances relative to each other. Knowing thyself is also a necessary element of doing this successfully. Since different types of concerts (a two-hour solo piano date vs. a symphony solo voice performance vs. a jazz combo show vs. a big band concert, etc.) require mastery of completely different repertoire and stylistic delivery, one must be careful to give oneself adequate time between performances for the voice to rest and for the mind and body to fully absorb the next assignment. Having eight shows a week on Broadway is one thing–the show is the same each night for a series of weeks or months, as taxing as that may be–but in my niche, each show (and I mean EACH show!) is different, having a different songlist and most often completely different repertoire. Each concert is advertised very uniquely as being a “one-night-only” event, so symphony conductors, concert presenters and venue owners often help to create the songlist (or at least select the theme) for each singular performance. Challenging for the artist? Very. Rewarding for artists who love to take risks while performing a wide variety of repertoire? Extremely.